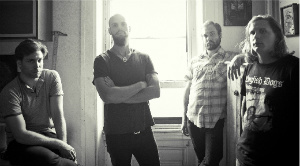 Baroness’ live version of “Cocainium,” a track from the band’s upcoming Live at Maida Vale EP, is streaming now via Pitchfork.

“Cocainium” is one of four songs from the band’s breakthrough album Yellow & Green that the quartet recorded during a July 2012 performance at Studio 4 Maida Vale, on BBC Radio 1’s Rock Show. The Live at Maida Vale EP is slated for a July 23 (July 22 in the UK) release via Relapse Records with the track listing as follows:

The EP will be available on an extremely limited edition 12″ vinyl, with the B-side featuring a silk screen of John Baizley’s beautiful and iconic artwork. Live at Maida Vale will also be available for digital download (and all vinyl orders receive a download code). Pre-orders are available via Relapse Records’ website.

Baroness, who recently completed their first round of live U.S. performances since the release of Yellow & Green with stops at Bonnaroo and Orion Festival, return to the road in late July with upcoming performances at Lollapalooza and FYF Fest. The band heads to Europe this autumn with Royal Thunder supporting on all headlining dates worldwide.