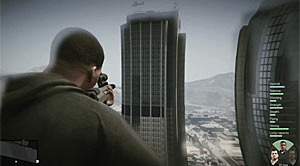 It’s been a while since we covered much on Rockstar Games upcoming installment in the GTA series. Fortunately, a new 5-minute gameplay trailer for GTA V has landed and it’s enough to suck in anyone into a franchise that has a world so expansive. It looks like exploration is on another level in GTA V, and boy does it look sick.

That’s what the trailer touches on the most, including a quick look at the stories and gameplay structure of the three main playable characters; Michael, Trevor and Franklin. Oh! Did I forget to mention the games mechanics? Rockstar shows a bunch of that off as well, specifically with gang banger Franklin.

Check it out, if you got a few minutes to spare. It’s worth it! GTA V is coming September 17, 2013 with pre-orders already open.