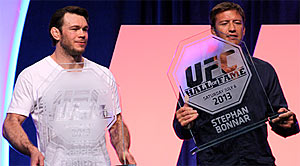 The 2013 UFC Fan Expo took place over the weekend at the Mandalay Bay Convention Center before UFC 162: Silva vs. Weidman, which gathered thousands of MMA fans from around the globe to check out the latest in UFC apparels, meet a dozen of the best fighters in the sport, take pics with the lovely ring girls, and so much more.

Aside from all the Q&A sessions with UFC President Dana White, Joe Rogan, Mike Goldberg, Bruce Buffer, Matt Hughes, Chuck Liddell, Chael Sonnen, and UFC’s first Women’s Bantamweight Champion Ronda Rousey, former UFC Light Heavyweight Champion Forrest Griffin and Stephan Bonnar were inducted into the UFC Hall of Fame. The duo who put on the “most important fight in UFC history” on the first season of the Ultimate Fighter were inducted in a ceremony presented by White.

Check out the clip above that captures the special moment at the UFC Fan Expo prior to UFC 162.