RoboCop To Blast Into The San Diego Comic-Con 2013 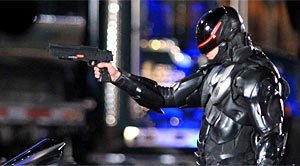 According to Sony, the RoboCop reboot will have a panel at the San Diego Comic-con 2013. That’s the official word from the company.

Let’s just hope RoboCop won’t blast his way into the annual convention with his Auto-9 gun like he did during the drug factory raid in the original film by Paul Verhoeven. That was a massacre! But my gut feeling is that pop culture nerds could put up a tougher fight than drug dealers. You just don’t want to mess with a guy or girl who’s got a handbag full of goodies picked up from Comic-con. These guys are packing everything from lightsabers to battle axes.

Anyhow, the RoboCop panel is set for Friday, July 19th. Expect to see some cool shit, and get updates on the production progress for the film.