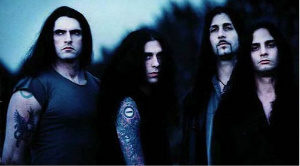 Type O Negative was, and still is, one of the greatest “gothic” metal bands ever. This concert, filmed in 1999 at the Bizarre Festival, Cologne, Germany, took place near the height of the band’s “mainstream” popularity. The concert was filmed for a German television broadcast, but the band eventually bought the rights, called it Symphony for the Devil and put it out on DVD in 2006.

In addition to the amazing concert footage here, you also get to see how much fun and carefree the band was behind the scenes. Bonus, you get to see a young Lacuna Coil. One thing about the guys behind the scenes though: What was up with their seeming obsession with filming guys taking a crap?

The 20-year run, however, came to a tragic end in 2010, when frontman, bassist, songwriter, and literal giant in the heavy metal world, Peter Steele, met an untimely and all too common end. On April 14th, Steele died of heart failure at the age of 48. As with any great artist and musician, we’re fortunate to have his songs, albums, and performances to keep his memory alive.

Steele was truly a unique musician and vocalist. The songs he created and performed with Type O Negative are powerful, rich, and pensive, as well as heavy and hard. Lyrically, while there was a serious side to the lyrics, they often fell on the darkly humorous side. He was a wicked bass player, as can be seen undeniably on the Symphony for the Devil DVD, and his vocals were a deep, rich baritone.

Enjoy the Type O Negative performance on the Symphony for the Devil DVD.