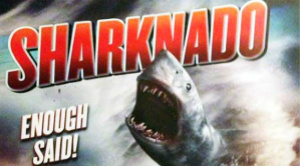 That’s right, on July 11th, Syfy will premiere Sharknado… and it looks as spectacularly campy as it sounds.

We’re not opposed to suspending our reality here at Yell! Magazine. Seriously, we love the shark genre so much that we’ve bought into hybrid shark-dinosaurs, hybrid shark-octopi, giant sharks, sharks that won’t die, etc., but sharks that can survive inside a tornado? C’mon!

At any rate, this is right up Syfy’s bad-movie alley, and as is often the case with the cable network, there are some notable stars in Sharknado, even if they’re has-beens: Tara Reid (American Pie franchise, Vipers), Aubrey Peeples (Necessary Roughness), Cassie Scerbo (Make It or Break It), John Heard (Big, Home Alone), Chuck Hittinger (Pretty Little Liars), and Ian Ziering (Beverly Hills: 90210, Godzilla: The Series).

Sharknado was written by Thunder Levin and directed by Anthony C. Ferrante. Look for it on July 11th, and don’t forget to check out the trailer at syfy.com.

Super tornadoes suck sharks up from the ocean floor, hurling them at LA. We’re not in Kansas anymore, Toto!