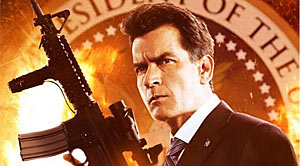 It was shit news when the release date for Rodriguez’ Machete Kills got officially pushed back to October, and we got over that announcement after a few pints of cervezas with star Danny Trejo. Unfortunately, I’m just joking here; that never happened. But the film’s new poster featuring Charlie Sheen just brighten up my day. If you’re not convinced that Sheen would make a good American president, then you’re living on the wrong planet, man. Sheen looks unstoppable as Carlos Estevez and America needs a president that can take care of business with his own hands. I’ll just rest my case with that!

Machete Kills is slated to hit theaters on Friday, October 4, 2013.