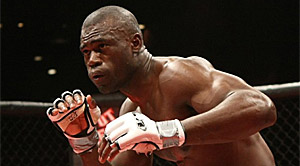 For those of you looking forward to seeing TUF 17 finalist Uriah Hall step inside the Octagon once again, you’ll be happy to hear that his fight is still set to take place on the UFC on FOX Sports 1 main card. However, the UFC has officially made a new change to his bout. His original middleweight opponent, Nick Ring, has dropped out for unreported reasons, and has been replaced by Josh Samman.

Samman also appeared on TUF 17, but lost to season winner Kelvin Gastelum via rear-naked choke in the first round in the semi-finals. Previous to that fight, Hall called out Samman in one of the episodes of the show, and now he’s got his dream TUF fight set on FS1.

UFC on Fox Sports 1: Shogun vs. Sonnen is slated for August 17, 2013, at the TD Garden in Boston, Massachusetts.