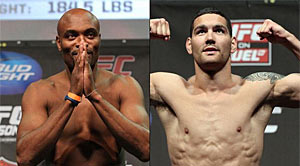 Are you jumping on the Weidman train like everyone else is for UFC 162? Well, a lot of people, including pros, think he’s got all the tools to beat UFC Middleweight Champion Anderson Silva next weekend because Chris Weidman‘s skill set is a lot like Chael Sonnen’s in a way. In his prime, Sonnen was the first man to give Silva a challenge inside the Octagon.

Are you curious to know which fighter the pro MMA fighters are picking? You may be surprised by how many pros picked the underdog in this fight, including Martin Kampmann, Urijah Faber, Josh Thomson, and Brendan Schwab. Check out the video above as more pros give their pick for UFC 162!

UFC 162: Silva vs. Weidman is slated for Saturday, July 6th, at the MGM Grand Garden Arena in Las Vegas, Nevada. The weigh-in will take place this Friday, so stay tuned for more here on Yell! Magazine.