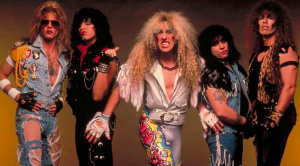 Well, last week I wanted to put up a Twisted Sister full concert, but I put up an Amon Amarth concert instead. One reader expressed a wish to see Twisted Sister, and so, here it is.

I know Twisted Sister gets slagged a lot, which is, I think, due to “We’re Not Gonna Take It” and “I Wanna Rock.” These two tracks come off of 1984’s Stay Hungry (their third album), which was hot on the heels of Quiet Riot’s 1983 album, Metal Health. I mention Metal Health because it contained two breakthrough metal songs, “Metal Health (Bang Your Head)” and “Cum on Feel the Noize,” the former being the first heavy metal song to ever crack the top 5 on Billboard’s Hot 100 chart. Metal Health then proceeded to become the first American heavy metal album to hit No. 1 on Billboard’s album chart.

I know I’m digressing. The point I’m trying to make is that Twisted Sister’s “cheesy” songs were on par for the era.

Now, for all the shitheads who define Twisted Sister by those two songs and a weird androgynous look need to realize that the band had some killer songs and had a massive cultural influence. First, know that Twisted Sister formed in New York City in 1972. As such, they were part of the early NYC punk movement. Not that they were punk, but they were peers to such legends as the New York Dolls and KISS and that whole NYC club scene.

Second, there wasn’t a kid in the mid ’80s that didn’t know and get excited by “We’re Not Gonna Take It” and “I Wanna Rock.” They were god damn anthems speaking to alienated kids with parents from an older generation that didn’t understand what their kids were into.

Third, Twisted Sister was a weapon. It’s true. In 1990, the U.S. used psychological warfare to capture Manuel Noriega, the deposed Panamanian dictator who had sought refuge in the Vatican Embassy. The U.S. would have violated a treaty had they entered the embassy. Instead, they set up a perimeter and blasted popular music, Twisted Sister’s “We’re Not Gonna Take It” was on the playlist.

Fourth, in 1985 Dee Snider was one of a few musicians to testify in the Senate and stand up for the freedom of speech. Twisted Sister was among the bands singled out by the conservative Parents Music Resource Center (PMRC) group for producing lewd, violent, sexual, and corrupt content. The PMRC is the reason albums have a warning label on them. Check out Snider’s speech:

I’d say all that adds up to being pretty relevant (at the time) and culturally significant.

Naturally, Twisted Sister broke up and has reunited. Dee Snider has had the most success outside the band, becoming a radio DJ, getting into film, and starring in his own reality show.