Stephen King Responds To Fan Complaints On “Under The Dome” 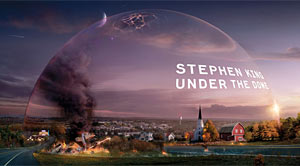 Stephen King Responds To Fan Complaints On “Under The Dome”

Everyone at this point is pretty much aware that CBS’ Under the Dome series is an adaptation of Stephen King‘s novel of the same name. In some cases, adaptations are great and others are considered trash. However, for me it’s too early to tell if Under the Dome is bad. In fact, I really like it, but the show seems to be getting some early fan resistance.

Since the very first episode aired last week, a number of complaints flooded in from fans of the book. Their concern has to do with some of the drastic differences between the TV series and the book. I guess there’s been enough complaints because the show’s executive producer, Stephen King himself, felt the need to write a letter explaining the changes, which you can read right below if you’re one of those affected by them.

“For those of you out there in Constant Reader Land who are feeling miffed because the TV version of Under the Dome varies considerably from the book version, here’s a little story.

Near the end of his life, and long after his greatest novels were written, James M. Cain agreed to be interviewed by a student reporter who covered culture and the arts for his college newspaper. This young man began his time with Cain by bemoaning how Hollywood had changed books such as The Postman Always Rings Twice and Double Indemnity. Before he could properly get into his rant, the old man interrupted him by pointing to a shelf of books behind his desk. ‘The movies didn’t change them a bit, son,’ he said. ‘They’re all right up there. Every word is the same as when I wrote them.’

I feel the same way about Under the Dome. If you loved the book when you first read it, it’s still there for your perusal. But that doesn’t mean the TV series is bad, because it’s not. In fact, it’s very good. And, if you look closely, you’ll see that most of my characters are still there, although some have been combined and others have changed jobs. That’s also true of the big stuff, like the supermarket riot, the reason for all that propane storage, and the book’s thematic concerns with diminishing resources.

Many of the changes wrought by Brian K. Vaughan and his team of writers have been of necessity, and I approved of them wholeheartedly. Some have been occasioned by their plan to keep the Dome in place over Chester’s Mill for months instead of little more than a week, as is the case in the book. Other story modifications are slotting into place because the writers have completely re-imagined the source of the Dome.

That such a re-imagining had to take place was my only serious concern when the series was still in the planning stages, and that concern was purely practical. If the solution to the mystery were the same on TV as in the book, everyone would know it in short order, which would spoil a lot of the fun (besides, plenty of readers didn’t like my solution, anyway). By the same token, it would spoil things if you guys knew the arcs of the characters in advance. Some who die in the book—Angie, for instance—live in the TV version of Chester’s Mill… at least for a while. And some who live in the book may not be as lucky during the run of the show. Just sayin’.

Listen, I’ve always been a situational writer. My idea of what to do with a plot is to shoot it before it can breed. It’s true that when I start a story, I usually have a general idea of where it’s going to finish up, but in many cases I end up in a different place entirely (for instance, I fully expected Ben Mears to die at the end of Salem’s Lot, and Susannah Dean was supposed to pop off at the end of Song of Susannah). ‘The book is the boss,’ Alfred Bester used to say, and what that means to me is the situation is the boss. If you play fair with the characters—and let them play their parts according to their strengths and weaknesses—you can never go wrong. It’s impossible.

There’s only one element of my novel that absolutely had to be the same in the novel and the show, and that’s the Dome itself. It’s best to think of that novel and what you’re seeing week-to-week on CBS as a case of fraternal twins. Both started in the same creative womb, but you will be able to tell them apart. Or, if you’re of a sci-fi bent, think of them as alternate versions of the same reality.

As for me, I’m enjoying the chance to watch that alternate reality play out; I still think there’s no place like Dome.

As for you, Constant Reader, feel free to take the original down from your bookshelf anytime you want. Nothing between the covers has changed a bit.