40 Years Of Terror – The Exorcist Gets New Art & More 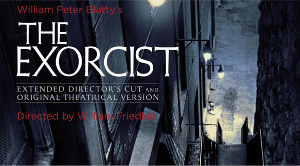 You haven’t earned your horror legs until you’ve seen The Exorcist. Back in the day it caused people to walk out of theaters and it’s continued to scare the pants off of folks in the 40 years since its release. In that time it’s been spoofed, it spawned sequels, and, yes, it even has a line of toys.

Note: The video above, “Didn’t You Used to Be Satan?” isn’t necessarily part of the 40th Anniversary Edition, but it shows just how terrifying it was.

Bringing 40 years of terror to the masses is an accomplishment, a testament to the quality of the film and its timeless content. In honor of all that, Warner Bros. will be releasing a 40th Anniversary Edition Blu-ray on October 8, 2013. And it’s coming with some new box art, which is beautiful.

There’s a lot of to be celebrated in this 40th year:

Friedkin and Blatty will attend a special 40th Anniversary screening of their film at the Smithsonian in Washington, D.C., on October 30. The Exorcist will also have an exclusive theatrical engagement October 31st through November 7th at the AMC Georgetown. If you happen to be a horror fan in Georgetown around this time, you might want to adjust your plans to include this screening.

What you get in The Exorcist 40th Anniversary Edition for the suggested retail price of $49.99 is quite a deal:

–Beyond Comprehension: William Peter Blatty’s The Exorcist 40 years after his novel was published, The Exorcist author, screenwriter, and producer returns to where it all began. First stop is a cabin/guest house in the hills of Encino, California, where Blatty wrote the novel. The author visits the place for the first time in 40 years and shares not only memories of writing the book, but also discusses how it inspired him. We then meet Blatty in two key and iconic locations: Georgetown University where the film was shot, and at the now-famous Exorcist steps. Throughout, Blatty reads from his novel, including an excerpt from a chilling newly published passage.
–Talk of the Devil – While at Georgetown University, William Peter Blatty heard about a true case of possession from Father Eugene Gallagher. At the time the film came out, the priest talked at length about exorcism, the true story and about Blatty. This footage is now available for the first time in many years. It is as revealing as it is shocking.
-Two Commentaries by William Friedkin.
-Commentary by William Peter Blatty.
-Introduction by William Friedkin.
-1998 BBC Documentary, The Fear of God: 25 Years of the Exorcist.
–Raising Hell: Filming the Exorcist Set footage produced and photographed by Owen Roizman, camera and makeup tests, and interviews with director William Friedkin, actress Linda Blair, author/screenwriter/producer William Peter Blatty and Owen Roizman.
The Exorcist Locations: Georgetown Then and Now — Featuring a tour of the iconic locations where the film was shot.
–Faces of Evil: The Different Versions of The Exorcist — with director William Friedkin and author/screenwriter/producer William Peter Blatty discussing the different versions of the film and featuring outtakes from the film.
-Original ending
-Interviews
-The original cut
-Stairway to Heaven
-The Final Reckoning
-Sketches & storyboards
-Radio spots
-TV spots
-Trailers
-Excerpt of The Friedkin Connection: A Memoir