Anthony “Showtime” Pettis Out For Six Weeks With Injury, Title Shot Is Out The Door 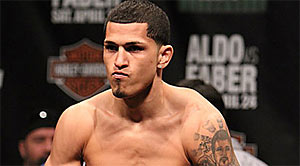 Anthony “Showtime” Pettis Out For Six Weeks With Injury

It’s a shame that we won’t get to see Anthony Pettis at UFC 163. Due to a knee injury, Pettis had to pull out of his featherweight title shot against Jose Aldo on August 3rd. It’s a bigger shame for Pettis because he now knows that he won’t get a lightweight title shot anytime soon, as he won’t be able to fight UFC Lightweight Champion Benson Henderson at UFC 164 on August 31st either. He lobbied for this fight prior to receiving the news about how long it will take him to recover.

Given the six weeks of rest (twice as long as Pettis feels he needs) that the UFC-approved doctor in Las Vegas has prescribed (UFC President Dana White confirmed this earlier this week with MMA Fighting) combined with the typical months of training required for a fight, it’s no surprise that Pettis’ lobby has been denied.

Pettis tweeted about his injury just the other day:

Injuries are part of the sport, Small tear in my meniscus. I was so ready for this fight, this won't stop me!Be back soon. @ufc @danawhite

Although T.J. Grant is officially next in line for a title shot at lightweight, Pettis still tried to replace him at UFC 164 prior to the six week recovery notice.

“I’m not going to say I should be fighting and T.J. Grant didn’t earn his shot,” Pettis said on the MMA Hour. “T.J. Grant earned his shot, and he’s there for a reason. I don’t want the fans to think I’m trying to take his position or anything like that, but at the same time, you can’t knock me for trying. I want a title shot so bad.”

This isn’t the first time Pettis has been close to a title shot and lost it, and it definitely doesn’t mean he won’t get another one in the future. Fortunately, no surgery is required for Pettis, so it clearly means he will be back very soon and hopefully get another title shot in no time.