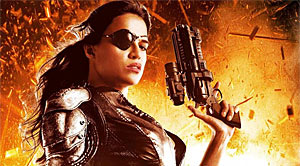 Earlier this week, it was announced that Robert Rodriguez’ sequel to Sin City got a new release date attached to it, and I think I jinxed Machete Kills when I mentioned it in the report. I wish I could retract the mention because, for unknown reasons, Open Road Films has now pushed back the release date for Machete Kills. I guess that makes me a believer in karma.

The film was originally scheduled for September. As of today, the new date is officially set for Friday, October 4, 2013. At least the change is only a few week’s difference rather than nearly a complete year like Sin City: A Dame to Kill For.