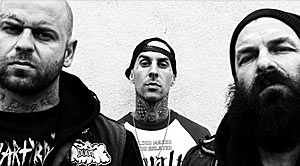 The album is a mix of various punk genres, just like its members, but it all coalesces and ends up sounding like pure old-school punk (except for the hip-hop-inspired “Something’s Different”). If you like what you hear, look for it to hit the streets June 25th.

“When we started this band 13 years ago, we weren’t worried about who was going to like us,” states frontman Rob Aston. “We still aren’t. In A Warzone is more raw and stripped down than our previous releases. In my opinion, it’s our best album. It’s always been difficult to classify Transplants. But at the end of the day, we’re a punk rock band. We make whatever type of music we want.”

It doesn’t get any more punk rock than that (well, it does, but who gives a fuck).

The Transplants are currently on the road in North American opening for Rancid. Tim Armstrong is playing with both bands.