Frankenstein’s Army – Is This The Wolfenstein Movie Everyone Is Talking About? [VIDEO] 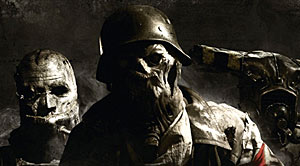 However, I must say it’s a shame because the film looks terribly good, and I get a feeling director Richard Raaphorst was indeed inspired by Wolfenstein. Just take a sneak peek below at the new quad poster released for the film to see what I mean. Or, if you haven’t already done so, just watch the bloody trailer. You will enjoy every second of it. Frankenstein’s Army is scheduled for a limited theatrical run in the U.S. on July 26, 2013. Mark it in your calender!