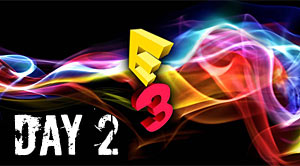 Today marks the second day for E3 2013, and the annual event proves once again to be just as fulfilling as the last one. Year after year, video game publishers and developers do their best to showcase an upcoming game without any flaws, but in most cases the product isn’t complete.

Unfortunately, bugs happen and unpredictable errors cause games to crash or freeze, as was the case during the Battlefield 4 presentation on the Xbox One and the Assassin’s Creed IV: Black Flag live gameplay demo for the PS4. Those are the ones that stand out the most this years in terms of “biggest fail.”

However, the show must go on for the fans. Plus, there were tons of other games presented at E3 to look forward, like the ones we listed for day one of E3 2013. And now, we bring you the “best of the best” of day two:

Shinji Mikami, the father of survival horror, is back to direct The Evil Within, a game that embodies the meaning of pure survival horror. Highly crafted environments, horrifying anxiety, and an intricate story weave together to create an immersive world that will bring players to the height of tension. The Evil Within is in development for Xbox 360, PlayStation 3, PC, and next-generation consoles. It’s slated for release in 2014.

Taking place in 1960, Wolfenstein: The New Order depicts an alternate timeline — one in which the Nazis won World War II and took over the world… and only B.J. Blazkowicz can stand up to them.

Visari is gone, but the war is far from over. Helghast forces have mounted a devastating counter-attack, prompting the ISA evacuation of planet Helghan. As new Helghast battalions appear, armed with more powerful weapons, ISA forces find themselves outmanned, outgunned, and surrounded.

The debut gameplay trailer of The Witcher 3: Wild Hunt gives you an exclusive sneak peek into the vast and gritty world of Geralt of Rivia, the witcher. Experience a realm where morality is not a simple choice between good and evil and where every decision ripples through the 100 hours of gameplay that CD Projekt RED has handcrafted to meet the needs of the RPG fan.

The trailer for the upcoming game in the Bayonetta series: Bayonetta 2 being revealed at E3 this year!

The set in The Dark Sorcerer is composed of about 1 million polygons. Each character contains just under 1 million polygons, 350MB of textures, and around 40 shaders. The demo uses Physically Based Shaders, volumetric lights, full HDR, Color Grading, Physical Lenses, and translucence to render skin. Changes in lighting are rendered in real time, including during the “special effects.”

Are you ready for some ninja, zombie, and Spartan action? Get your fill after the jump…