State Of Decay Hits XBLA Tomorrow – Are You Ready To Test Your Zombie Survival Instinct? 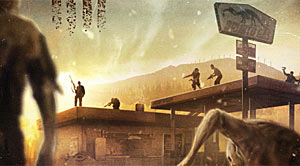 You can debate for hours with your friends on the best ways to survive a zombie apocalypse. You can also take tips from The Walking Dead or even from lead vocalist Matt Heafy from Trivium, who hooked us up with his list of the top 5 must-have items to survive a zombie threat.

And, yes, all of them would work great in theory, but since you can’t put them to the test in the real world, none of them prove to be any better than the next. That is, unless you play a game that promises a dynamically generated experience that changes in real-time.

That game is nearly here; it’s called State of Decay and it will let you put your personal zombie survival plan to the test starting tomorrow.

State of Decay can be downloaded for your Xbox 360 via Xbox Live Arcade on Wednesday, June 5th, for 1,600 Microsoft Points. You can also expect a PC version at a later date.

More About State Of Decay

The end is here. Life as you knew it has gone to hell after the mother of all zombie outbreaks. Now you and the few scattered survivors must band together to survive and rebuild in a third-person action game set in a dynamic open world. You choose where to make your stand, designing and fortifying your home base, performing daring raids for food and ammunition, and rescuing other playable survivors with unique talents. The open, sandbox world develops in real-time, shaped by your actions, dynamically generating content based on your choices and the ever-increasing zombie threat.