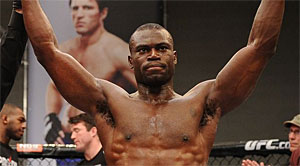 Uriah Hall is name to remember in the MMA because he put on one the best performances in TUF history after he KO’d contestants on the UFC reality show. Specifically, one to remember is Hall’s spinning hook kick that knocked out Adam Cella at the end of the first round of their quarterfinal fight. There is no denying the fact that Hall is a natural fighter and has potential to be UFC middleweight champion at one point in his career.

Despite losing to TUF 17 winner Kelvin Gastelum via split decision, the UFC is giving him a second chance to show the world his full potential inside the Octagon. It’s announced that Hall will face Calgary-based fighter Nick Ring on FOX Sports 1.

#BREAKING: @Promise_RiiNG will face @UriahHallMMA in a middleweight bout, August 17 in Boston on @FoxSports1!

Both men are coming off a loss via decision, and they will need to prove themselves again on August 17 in Boston.