Slasher Movies Are Not About Rape 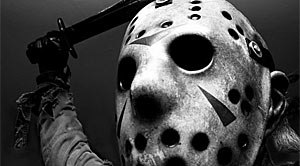 A recent article published at www.thelmagazine.com implies that “all slasher movies are about rape.” Author Henry Stewart claims that “knives are the most sexually charged” and stabbing a victim is “essentially rape – penetration without permission.” He adds to the preposterous claim with the hyperbolic statement that “Chainsaws even are basically just giant mechanical knives.”

Admittedly, I get the metaphor that Stewart is proposing. Any horror fan has stumbled onto this concept and it’s nothing new or groundbreaking. While many of us may give some credence to Stewart’s claim that stabbing is rape and slasher movies do, in part, explore this, it’s fair to say that an entire slasher movie, and the entire genre, is not about rape.

Think about the psychopathic dedication it would take for one, just one, individual to create a film dedicated to this metaphor. He’d have to have a Charles Manson-like charisma to persuade the crew and actors to participate in such a deranged undertaking. Then think about yourself, and all the other horror/slasher movie fans: Are we all so sexually depraved and misogynistic to not just view, but love, the genre? Granted, it takes a certain personality to appreciate these films, but to suggest that we’re all drinking the Kool-Aid of some fucked up director is preposterous.

Stewart makes no true argument in his article, but he does move on to feminism in horror. He makes reference to the new Soska sisters’ film, American Mary, and I agree with what he’s saying there: it’s about women reclaiming their power after it’s been usurped by a suppressor. But that’s where my agreement ends. Stewart also confuses some genres in my opinion, mixing up slasher with exploitation and revenge flicks.

Obviously, we at Yell! Magazine are going to defend our beloved genre, and we also believe that everyone is entitled to their own opinion, even if they are wrong. We also know that all slasher movies are not about rape, at least solely. Scream nicely summed up what they are about:

Clearly Wes Craven has given this some thought. It’s pretty widely accepted that slasher films are about being chaste, about having a moral compass, about our fears, and about our guilt.

If anything, slasher movies are Christian cautionary tales, or modern-day fairy tales. Honestly, is Jason, Freddy, or Michael any more terrifying than a wolf who ate grandma, than a witch who eats children, than a witch who abducts a young girl and locks her up in a tower, than a stepmother who sends a hunter to cut out her stepdaughter’s heart?