Bloody Hell! We’ve Got New In-Game Screenshots For The Evil Within 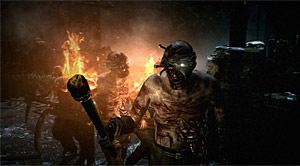 Today, we’ve got new screenshots for The Evil Within project. Released by Bethesda Softworks, these images prove that the upcoming survival horror game lives up to its cool name. I must say the game looks spooky as hell, and I have a strong feeling I’m going to leave a long trail of shit after I complete it. No joke intended here, it really looks like Shinji Mikami has outdone himself again with the latest game he will helm. The Resident Evil series that Mikami created looks like child’s play compared to this. I honestly feel that way, but before I get too excited about The Evil Within, I’ll wait to see how the gameplay turns out before I confirm my statement.

For now, just take a look at the screenshots for yourself, and leave your say about them in the comments section below.

Shinji Mikami, the father of survival horror, is back to direct The Evil Within™ – a game embodying the meaning of pure survival horror. Highly crafted environments, horrifying anxiety, and an intricate story weave together to create an immersive world that will bring players to the height of tension. The Evil Within is in development for the Xbox 360 video game and entertainment system from Microsoft, the PlayStation3 computer entertainment system, PC, and next generation consoles and is slated for release in 2014.