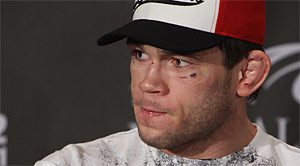 American mixed martial artist Forrest Griffin is retired from the sport as of yesterday, May 25th. Griffin made the official announcement after UFC President Dana White opened with a touching speech last night at the UFC 160 post-fight presser.

“His charisma, his personality, his fighting style, has helped elevate the world of mixed martial arts and the UFC to where we are today. He is one of the building blocks in this sport and in this company, and tonight, we are going to announce his retirement.”

The former UFC Light Heavyweight Champion will forever be remember for his success during his climb to prominence in the UFC after winning the first season of TUF. In the tourney finals, Griffin put on a spectacular show with Stephan Bonnar, placing the fight in UFC history as one of the greatest ever. Griffin vs. Bonnar is also widely credited as sparking the current success of the UFC, Dana White noted above.

Griffin addressed his retirement to the media with the following statement.

“I’ve had a good eight years I guess, the biggest thing I’ve learned is that if Dana White says you should retire, you should retire, otherwise you will blow your knee out before your next fight.” Dana White went on to say, “Everything we have ever asked of Forrest Griffin, he has done. Every time Forrest Griffin has stepped inside the octagon, he has given everything he has. He will stay with the UFC, he will have some role and some title. Hopefully he will work more than Chuck Liddell does. But yes, he will stay here and be with this company at least for the rest of my life.”

Griffin leaves the sport with a professional record of 19-7. He won his last fight over Tito Ortiz at UFC 148 via unanimous decision, which also earned him the Fight of the Night bonus.