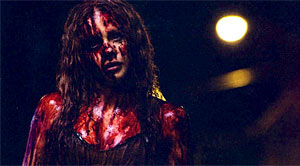 Oh my! It’s been quite a while since we dropped an update on the remake of Carrie, and we apologize for that because the film looks mighty promising. However, you may not feel like that if you haven’t seen the trailer for it yet, so we highly suggest you get off your lazy ass and check it out. We promise you’ll enjoy watching reinterpreted scenes from the classic in the remake directed by Kimberly Peirce. The film stars Chloë Grace Moretz, Ansel Elgort, and Julianne Moore.

Unfortuntely, we don’t have anything exciting to share with you other than a slick new motion poster for Carrie that we came across earlier today. The digital poster is made up with a bunch of looped animated Gif’s, and it’s pretty gimmicky, but will any of you really care? I doubt it.

Carrie is slated for release on October 18th in the U.S. and November 29th in the UK.

The quiet suburb of Chamberlain, Maine is home to the deeply religious and conservative Margaret White (Moore) and her daughter Carrie (Moretz). Carrie is a sweet but meek outcast whom Margaret has sheltered from society. Gym teacher Miss Desjardin (Greer) tries in vain to protect Carrie from local mean girls led by the popular and haughty Chris Hargenson (Portia Doubleday, Youth in Revolt), but only Chris’ best friend, Sue Snell (Gabriella Wilde, The Three Musketeers), regrets their actions. In an effort to make amends, Sue asks her boyfriend, high school heartthrob Tommy Ross (newcomer Ansel Elgort), to take Carrie to prom. Pushed to the limit by her peers at the dance, Carrie unleashes telekinetic havoc.