MMA: Alistair Overeem To Take On Travis Browne For UFC On FOX Sports 1 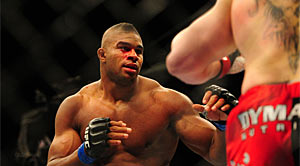 It’s already close to two years since UFC heavyweight Alistair Overeem made his debut in the Octagon against Brock Lesnar, ultimately defeating the former heavyweight champion by TKO in 2:26 of the first round. It was an impressive win that night, which most people assumed would go his way considering his standup was far superior than Lesnar’s. Overeem stopped him with a vicious kick to the liver, and shortly after the fight Lesnar announced that he was going into retirement.

However, Overeem’s return after a post-fight suspension for a failed drug test was a huge upset against Antonio “Bigfoot” Silva because he completely dismissed the skills of “Bigfoot” before the fight even got started. Subsequently, an overconfident Overeem in the final round costed him a title shot. Silva KOd Overeem that night and “The Demolition Man” walked away from the Octagon in shame.

Overeem now needs to redeem himself and show the heavyweight division that he means business again. Another devastating loss like that could potentially hurt his MMA legacy, which he accomplished through his years in Dream, K-1, and STRIKEFORCE.

His next opponent, Travis Brown, may not be the biggest threat at the moment in the UFC heavyweight division, but another impressive win like Lesnar’s could put Overeem right back on track for the strap.

MMA Fighting confirmed the booking of Overeem vs. Browne earlier today, and both men are set to square off inside the Octagon on the main card for UFC on FOX Sports 1, slated to take place at the TD Garden in Boston, Mass., on August 17, 2013.