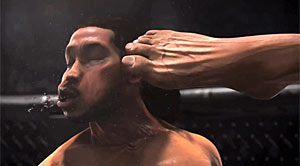 Newsflash UFC fans, Xbox One (not named Xbox 720 after all) was unveiled by Microsoft yesterday in Redmond, Washington, the next-gen gaming console by the company that promises to be the only system in your household. Ya right! I honestly doubt that, but after the announcement was made, developers like EA Sports had a chance to showcase next-gen games such as Madden, FIFA 14, NBA Live and of course the new UFC game.

During the presentation by EA Sports, interview clips from UFC Light Heavyweight Champion Jon Jones and rising MMA star Anthony Pettis were shown to gamers, along with athletes from other sports. Additionally, EA teased the new Ignite engine that will enhance games with human intelligence, true player motion, and living worlds.

You can take a quick peak at what new sport games will look like in the trailer above, which also features the famous Showtime Kick by Anthony Pettis on Benson Henderson.