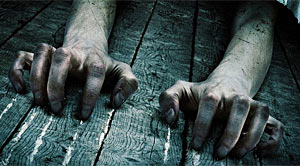 It looks like director Steven C. Miller did it again in the horror genre and pulled off a terrifying ’80s inspired horror film with Under The Bed starring Jonny Weston and Gattlin Griffith.

Based solely on what I saw in this new red band trailer for the film, I get a feeling Miller’s direction was fueled by classics such as The Gate, The Lost Boys, and even a hint of inspiration from the cocoon hatching scene in Gremlins. That doesn’t sound surprising to me because he previously told us in an interview that he is a fan of Joe Dante, so I don’t believe my presumption is far-fetched. Just watch the freaging trailer and you’ll see exactly what I mean.

Miller is known for directing the reimagining of Silent Night, Deadly Night, an ass kicking Christmas horror story that I enjoyed greatly because it had a bunch of cool kill scenes. So I’m definitely looking forward to another release of his.

About Under the Bed

Every child knows about the monster under the bed—Neal Hausman’s mistake was trying to fight it. Neal (Jonny Weston, Chasing Mavericks) has returned from a two-year exile following his tragic attempt to defeat the monster, only to find his father ticking ever closer to a breakdown, a new stepmother who fears him, and his little brother Paul (Gattlin Griffith, Green Lantern, Changeling), terrorized by the same monster. While Neal and Paul work together to try and fight the nocturnal menace, their parents are taking desperate measures to get the family back to normal. With no support from their parents, the brothers have nothing to rely on but each other, and courage beyond belief.