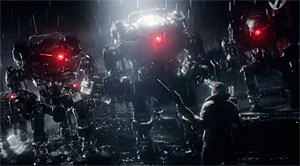 For those of you who didn’t see this coming, American war hero B.J. Blazkowicz is back again in new installment in the Wolfenstein series entitled Wolfenstein: The New Order. Bethesda Softworks launched the first teaser trailer for it today, and also announced via Twitter that Machine Games is currently developing the FPS.

“We are excited to bring a new chapter of Wolfenstein to gamers everywhere,” Jens Matthies, creative director of the Sweden-based MachineGames, said in a statement. “As fans of the series, working on this game is an honor, and our team is driven to create an unforgettable action-adventure experience that will make FPS [first-person shooter] fans proud.”

According to Gamespot, Blazkowicz must launch an “impossible counter-offensive” against the Nazi powers that rule the world, set in an alternate 1960s. Sounds like a heck of a challenge doesn’t it? If not, you’ll see for yourself that the Nazi’s have a new killer weapon that looks like a freaging Mech, which is teased in the new trailer. If that’s the case then I hope to god Blazkowicz is geared up with more than just a shotgun and a Submachine gun.

Wolfenstein: The New Order will hit the Xbox 360, PlayStation 3, and PC later this year. Next-generation consoles will also get the game, but Bethesda didn’t specify which ones.