Eli Roth’s Aftershock Has A Whole Lotta Ass, Gore, And A Tsunami [VIDEO] 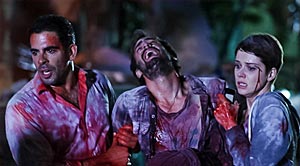 Without a doubt, director, producer, and actor Eli Roth is up to nothing but horror these days – and his upcoming film, Aftershock, has a whole lotta horror. There’s also hot Chilean women, wild parties, and a freaking huge tsunami, which, frankly, I have no idea how on Earth the girl didn’t see it coming at the very end of this new red band trailer for Aftershock. I honestly don’t really care because I’m not here to watch another global cataclysm film by Roland Emmerich, but an Eli Roth-produced horror masterpiece directed by Nicolás López.

The Weinstein Company has already acquired Aftershock after its premiere at TIFF, and word is that it will receive a limited theatrical run on May 10, 2013.