Ron Perlman Wants A Hellboy III, But Will Guillermo Del Toro Give Him One? 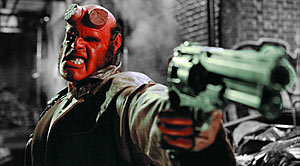 Ron Perlman Wants A Hellboy III, But Will Guillermo Del Toro Give Him One?

I know Ron Perlman for two things: having a large mouth and for playing Captain Soames, a cop in a Stephen King’s Sleepwalkers. Those are honestly the two things that come to mind when I hear the name Ron Perlman.

But to others, like you, he is mostly known for portraying a comic book superhero created by writer/artist Mike Mignola named Hellboy, and according to ShockTillYouDrop, Perlman is demanding a third installment in the Guillermo del Toro-directed franchise. However, the big question is, will Del Toro give him a third after Pacific Rim?

“[Del Toro and I] both walked away from Hellboy 2 agreeing that there would never be another one,” he says. “But, with the passage of time, it became clear to me that he really always designed it as a trilogy. [Guillermo] has a very well-articulated idea of what the resolve would look like and it’s amazingly theatrical and is epic in scope and would make for amazing cinema, with or without the first two movies.”

The two Hellboy entries grossed together over $259 million worldwide, and based on that alone a Hellboy III should be inevitable. Since the Hellboy film franchise was never conceived as a trilogy, I’m now wondering if Perlman can pull off the unimaginable, and put enough Jewish guilt on Del Toro to direct another entry.

“I said [to Guillermo], ‘You owe it to the world to finish this trilogy,'” Perlman continues. “I’ve been giving him Jewish guilt.”

I guess for the time being, we’ll need to sit back and enjoy Pacific Rim before any official confirmation is announced for Hellboy III.