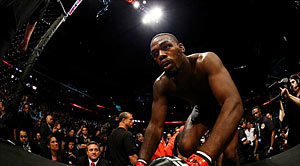 Before moving up to the heavyweight division, UFC Light Heavyweight Champion Jon “Bones” Jones has two more goals he wants to achieve, and it doesn’t sound like Lyoto Machida is one of them. First and foremost, Jones wants to break Tito Ortiz’s longstanding record in the light heavyweight division, and one more title defense would do the trick. Second, he still wants to prove critics wrong by facing an opponent almost as big as him like Alexander Gustafsson.

During the recent UFC 159 post-fight presser, Jones weighed in on a fight with Gustafsson, and briefly talked about a rematch with Machida, but that is off his radar for the moment.

“I fought Lyoto Machida before,” he said. “And I fight for the love of the sport, I fight for the people that support me. But I also fight to prove critics wrong. A lot of people believe I’ve been successful because I appear to be larger than my opponents. With Alexander Gustafsson, that would be no more. So Alexander Gustafsson, a guy who is 6-foot-6 or 6-5, big long legs arms, long legs, that’d be great, and that’s who I’d love to fight next.”

Dana White also commented, but didn’t have a clue on what could be next for Jones yet,

“Alexander should have fought that night. He didn’t fight. Jon Jones isn’t going to be fighting anytime soon apparently. He’s got a compound fracture. When I went into the octagon, the bone was sticking out of his toe. I’m not a doctor. I don’t know how long that takes to heal, but it can’t be too quick.”

Since Jones suffered a gruesome toe injury on Saturday night at UFC 159, he will be sidelined until ready to train again. Therefore, a light heavyweight bout between Machida and Gustafsson could very well be possible.

However, White won’t confirm anything until he knows for sure how long Jones will be out.