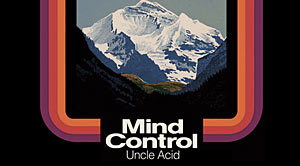 As I’ve said previously, 2013 is turning out to be the year of Sabbath-inspired Doom Metal. This phenomenon probably should have happened in 2012, you know, when the world was supposed to end, but it’s happening now and it’s kind of cool. As proof, let’s look at what’s happening: Black Sabbath is releasing a new album with Ozzy; Pentagram is on tour; Ghost BC, Purson, My Dying Bride, Moss, and others have new albums and/or tours this year.

Now, Uncle Acid & The Deadbeats are joining the cast and are preparing to release their third full-length album, Mind Control. The album is set for release on May 14th via Metal Blade Records/Rise Above Records in North America. The track “Valley of the Dolls” is currently streaming on NPR, and as they’re saying over there, you can’t deny the Beatle-esque sound to it. It’s an impressive track with reference to Charles Manson.

Check it out and let us know what you think.