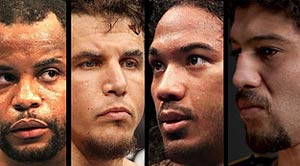 UFC on FOX 7 takes place Saturday night LIVE at the HP Pavilion in San Jose, California, and the event will be broadcasted for free on FOX Sports at 8:00 P.M. ET.

Additionally, Daniel Cormier will finally square off with former UFC heavyweight champion Frank Mir, a fight originally destined to happen in STRIKEFORCE, but was canceled due an injury Mir suffered in training.

The official weigh-ins for UFC on FOX 7 goes down today at 7:00 P.M. ET, and all 24 fighters (listed below) will step on the scale this afternoon, which you can watch LIVE right here on Yell! Magazine.

So don’t forget to bookmark this page!