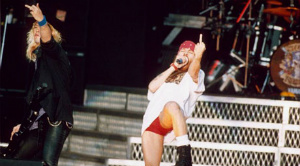 Heavy metal, sleaze metal, hard rock, drug-addled garbage, call it what you want, but in 1992 Guns N’ Roses were at the apex of their careers. Was it the best point in their careers? Hell no. They were bloated; full of ego, booze, and drugs; too big for their own damn good; and complacent.

Maybe complacent is too harsh. Maybe they were tired. If I were taking orders from Axl, I’d be tired too.

From a generally mono-sounding professional recording, to out-of-tune playing, mostly horrendous vocals, a pirate harmonica player, and more, there’s so much that’s wrong with this full-concert footage from Guns N’ Roses’ Tokyo 1992 show it’s ridiculous. So, why am I suggesting it for your Friday night auditory pleasure? The easy answer is that it’s somewhat historic (Axl showed up!). Really, it’s historic because it shows how success can destroy a band and it took place just a couple of years prior to the demise of the last significant G’N’R lineup. This show also shows just how big a deal G’N’R was back in the day, but at this point they were less G’N’R and more Elton John.

Despite the grandiose arrangements that made some songs nearly unrecognizable (“Sweet Child O’ Mine,” “Rocket Queen,” “Knockin’ on Heaven’s Door,” etc.) and the additional musicians that ultimately detracted from the street cred the band once had, this show features a band that can’t hold a candle to the one that performed at the Ritz in 1988. In 1988, Axl’s voice was less whiny and scratchy and more deep and beautiful (and he dressed less like a faggot who had just spent a couple of hours riding a bicycle seat post), Slash’s guitars were less, well, bad.

Don’t get me wrong, for the most part Axl and Slash woke up after Duff killed it singing lead on “Attitude,” especially Slash, but not enough to make me envious for not being there.

On the brights side, Duff and Matt showed up and played to near perfection. This is especially surprising in Duff’s case since he was near death at the time with a pancreas that was about to explode. That’s what a gallon of vodka will do to a guy.

Overall, when Axl couldn’t have spoken truer words that night when he said, “The perils of rock ‘n’ roll decadence.”

Let us know what you think of this show in our comments section below.