Stephen King Weighs In On The Prequel To The Shining 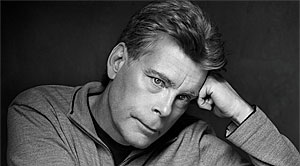 Stephen King Weighs In On The Prequel To The Shining

It’s fair to say that Stephen King isn’t usually thrilled about film adaptions based on his novels, because a number of them have just sucked. And to say The Shining is one of his least favorite is an understatement. Now that the word is out that Glen Mazzara is in talks to bring together a prequel to The Shining, titled The Overlook Hotel, I’ve been curious to know how the American author feels about the project. King, a scribe highly praised in the horror community for his 50 novels published to date has weighed in on The Overlook Hotel with Entertainment Weekly, and had the following things to say:

“I’m not saying I would put a stop to the project because I’m sort of a nice guy. When I was a kid, my mother said, ‘Stephen, if you were a girl, you’d always be pregnant.’ I have a tendency to let people develop things. I’m always curious to see what will happen. But you know what? I would be just as happy if it didn’t happen.”

It’s kind of hard to sense if King is really that disappointed, or if he even cares at this point in his career. But love or hate the project, like he said, we can only wait and see how it turns out, and hope for the best outcome possible.