Poster Revealed For Zombieland The Series – A New Dead Is Dawning. 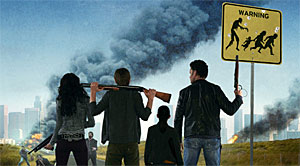 Hey look! The main cast of Amazon’s original Zombieland series is officially assembled, and fully armed to the teeth for an epic journey to kick some zombie ass in this new poster reveal.

Does this look insane or what? Warning to all zombies roaming the earth, this gung-ho tribe is coming soon to clear you out.

Although, still no word yet on when the FREE pilot will be out to Amazon customers, which is the seventh comedy pilot added to Amazon’s pilot line-up. But it sounds like a lot of effort is going into the Zombieland series, currently in production, with the intention to make it appeal to the most diverse zombie fan out there, including anyone who loves AMC’s The Walking Dead. So far we can’t tell if the production quality will be as good as TWD, however, the core of the Zombieland film will be packed into the series.

If the pilot goes well with customers, expect Amazon Studios to turn Zombieland into a full-season production, to air on Prime Instant Video. Tallahassee will be played by Kirk Ward (The Island), Maiara Walsh (Desperate Housewives, Switched at Birth) is cast as Wichita, Tyler Ross (Milkshake) will play Columbus, and Izabela Vidovic has the role of Little Rock.