Georges St-Pierre To Appear As Batroc The Leaper In Captain America 2? 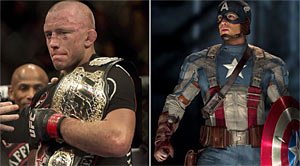 Georges St-Pierre To Appear As Batroc The Leaper In Captain America 2?

This is kind of weird news considering GSP plays a nice guy in real life, even when Nick Diaz tried to get under his skin recently at UFC 158. Calling Diaz an “uneducated fool” was the most threatening thing GSP said throughout the entire promotion for the UFC event last month, and to learn that he will play a villain in a Hollywood movie is quite interesting to say the least. Maybe this is his only way to truly show the world his dark side, which he claims to a have in a UFC 158 promo video.

According to Collider, UFC welterweight champion Georges St-Pierre has been added to the ensemble cast of Marvel’s sequel Captain America: The Winter Soldier. It appears that he is tapped to play onscreen as the villain Batroc the Leaper.

Here is Marvel’s take on the character:

Batroc has no superhuman powers, but he is one of the most formidable unarmed combatants in the world. He has mastered numerous martial arts and is perhaps the world’s leading master of savate, the French art of foot-fighting. He is an accomplished thief and smuggler with extensive military training. He currently carries a pair of whip-canes, which he uses with great skill.

Although it isn’t official yet, since the original source comes from a Latino review site, but we also learned that Robert Redford is currently in negotiation to play a high-ranking S.H.I.E.L.D. officer, and Frank Grillo is to play Crossbones. Additionally, Sebastian Stan is set to return as Captain America.

When GSP’s role in the film gets officially announced, we’ll be sure to keep you updated on Yell! Magazine. Captain America: The Winter Soldier is slated for release on April 4, 2014.