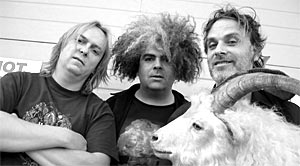 The Melvins are putting out an album of covers, titled Everybody Loves Sausages, and they’ve just started streaming “You’re My Best Friend,” originally by Queen. Queen is legendary, and despite my predilection toward metal, they’ve always been among my favorite bands.

Stream The Melvins’ cover of “You’re My Best Friend” at noisey.vice.com.

Before settling in to have a listen to The Melvins do this song, I was tepid; most Queen covers fail miserably, mostly because vocalists just can’t compete with the late Freddie Mercury. It’s usually best when they don’t, as Puscifer did on “Bohemian Rhapsody.” But the vocals on The Melvins’ cover, which features Caleb Benjamin of Tweak Bird, are great. The track also features the full Melvins lineup: Dale Crover, Buzz Osborne, Coady Willis, and Jarred Warren.

The Melvins didn’t go all-out gaming mode with “You’re My Best Friend,” but there is a distinctive 8-bit element to the track. I don’t think everyone will like it, but there is a certain appeal to it. At least it’s an original take on a mostly straight cover of a classic tune.

Everybody Loves Sausages is set for an April 30th release date via Ipecac. The 13-track album features guests Mark Arm, Jello Biafra, JG Thirlwell, and Scott Kelly on a wide variety of songs including Venom’s “Warhead,” Roxy Music’s “In Every Dream Home A Heartache,” and The Scientists’ “Set It On Fire.”

The Melvins have also confirmed a June 1 performance on Scion Rock Fest in Memphis as well as a handful of U.S. dates in late May. The band will travel to Europe in April for a number of Melvins and Melvins Lite performances.