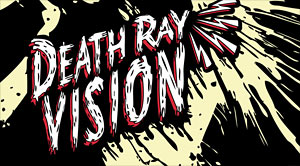 Current members of Killswitch Engage and Shadows Fall and ex members of Overcast and Cannae have combined forces to form the supergroup Death Ray Vision. These veterans of the Boston metal scene are playing a raw brand of metallic hardcore that recaptures the energy of their old-school hardcore roots. The songs are short blasts of energy and intensity (“Shattered Frames,” above, clocks in at 2 minutes) built on thrash metal rhythms and chugging guitar riffs.

The debut five-song EP, Get Lost Or Get Dead will be released May 14, 2013, on Bullet Tooth in 7″ Vinyl, Digipack CD, and digital download formats. The track listing is:

According to vocalist Brian Fair,

“When Mike and I first met, we went to see Leeway and Breakdown play in Boston. My love for raw, metallic hardcore began that day and the energy and insanity in that club is something that has stayed with me forever.”

After breaking their silence onstage at local Boston hardcore shows, Death Ray Vision entered Mad Oak Studio in Massachusetts with producer Benny Grotto to record the EP. The recording, which the band self released, captured the raw energy and emotion of the band combined with a modern production, seamlessly bridging the gap between the past and future. The sessions were the creative spark that inspired the band to continue writing to see how far they could push their sound.

“We started the band to have fun, there is really no other reason to do Death Ray Vision. Apparently we were having so much fun when we started writing for the first EP that we just kept writing and writing. All of a sudden, we had a crap load of tunes.”

Did you read that, folks? Death Ray Vision has a crap load of songs. So if you like what you’ve heard so far, you’re in luck.

With their new label partnership Bullet Tooth in place, Death Ray Vision has recently completed tracking for the new LP with producer Dean Baltulonis (Sick Of It All, Agnostic Front), which will be released in the summer of 2103.

“The band is really excited to get back in the studio,” explains Fair. “These new songs have pushed our sound to a new level and we can’t wait to unleash them on the world!”