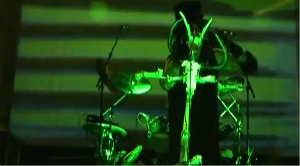 Everyone should know this band. Ministry is arguably the best Industrial Metal band to ever exist and Al Jourgensen is a true visionary. What started in 1981 didn’t see an official release until 1983, with With Sympathy, and Ministry would have to wait until 1992 to see mainstream success with the release of Psalm 69: The Way to Succeed and the Way to Suck Eggs. Though by that time people were heralding 1988’s The Land of Rape and Honey as the band’s greatest achievement, but I was still stuck on 1989’s The Mind Is a Terrible Thing to Taste.

After that, no one can deny that Ministry had an influence on Nine Inch Nails, Marilyn Manson, Chemlab, Pigface, Rob Zombie, and more. Basically, Ministry provided the alternative foundation to the alternative (i.e., grunge) scene of the 1990s. They also proved that you can, in fact, dance to heavy metal.

By 2007, and after 11 studio releases, Ministry was lyrically diving headlong into politics and speaking out against the then-current U.S. administration, and Jourgensen was ready to call it quits. So, that naturally means a tour entitled Adios… Puta Madres, or Later, Mother Fuckers. but, a couple of years later Ministry got back together, released another album, and went on tour – it’s like they never left.

This is one tight motherfucking concert. So, crank those speakers, crack a cold one, and set your party into overdrive. Also, don’t forget to remember the recently departed Mike Scaccia.