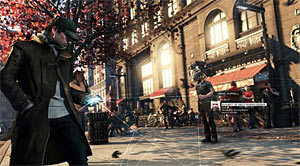 The rumors of the PlayStation 4 unveil this evening were indeed spot on at Sony’s PlayStation Meeting 2013. It sounds like the press conference was a blast, highlighted with a showcase of an epic lineup of PS4 games. Sony’s next-gen console will be on store shelves during the 2013 Holiday Season, and it’s fair to assume that the exact release date will be revealed at E3 in June. Don’t worry if you think you will fall short of cash for the PS4 this year; you still got plenty of time to sell off your drugs, or find any other means to earn some extra moula, if you catch what I’m saying.

Like I mentioned earlier, lots of games were presented, almost too many to list, but the ones that stand out in my opinion are: InFamous: Second Son, Killzone: Shadow Fall, Destiny, and Ubisoft’s Watch Dogs. I decided to feature this clip from Watch Dogs for the PS4 because the graphics look so damn real, and the gameplay truly feels like a sequence out of a Hollywood movie.

This is the type of game that we here at Yell! Magazine would love to play, and I’m sure after you watch the clip you will be jonesing for this release.