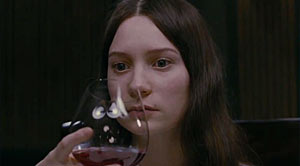 I’ll be honest, this new clip from Stoker is bar none boring and does not reveal much of the film other than Uncle Charlie (Matthew Goode) wants to befriend India (Mia Wasikowska), who’s father died in a tragic car accident. India confused by her uncle’s demand, tells him “We don’t need to be friends. We’re family.”

One thing is clear to me in this clip is that India is starting to show signs of suspicion toward Charlie. Is he the main link to the death of her father? That’s pretty much the hint I’m sensing out of it, and even though I mentioned that this clip is a sleeper, I’m still very much intrigued and definitely looking forward to the release. Chan-wook Park never disappoints with his films, yet.

Stoker was directed by Chan-wook Park (Oldboy, Thirst), which stars Mia Wasikowska, Nicole Kidman, and Matthew Goode. The script was written by Wentworth Miller (Prison Break), and according to reports, Stoker will receive a limited theatrical release starting on March 1, 2013.