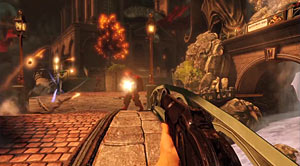 Publisher 2K Games has released a slick new trailer for Bioshock Infinite titled “Lamb of Columbia”, developed by Irrational Games for a worldwide release on March 26, 2013 for the Xbox 360, PlayStation 3 and Windows PC. The timing for this trailer feels just right because it has been a while since we have seen new gameplay footage from Bioshock Infinite. The last clip that we featured on Yell! Magazine was the first few minutes of the intro in the game that assumed the role of DeWitt as he begins to unravel the mystery that lies behind the floating city of Columbia.

Below is the official caption for the new trailer. Check it out and don’t forget to leave us a comment.

To clear his debt, Booker DeWitt must rescue a mysterious girl from the sky-city of Columbia. But who is this girl? What makes her so powerful, and why are so many willing to do anything to keep her from escaping? More importantly… what price will you pay to set her free?