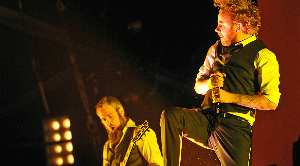 Sweden’s In Flames is a band that has split its fans perhaps more than any other band in history, the only other two comparable bands are Metallica and Van Halen. When In Flames played Wacken last year, the played a lot of newer material, which I think shows that they’re committed to their new direction. Yes, In Flames’ most recent studio efforts could say the same, but doing it live is a bolder statement.

I’m personally not opposed to it. I think that what they’ve become, which is more mainstream I guess, has always been essential to their sound. In the past it was in the background a bit more.

Still, it doesn’t change the fact that Anders Fridén has one of the best metal voices today and Björn Gelotte is equally wicked as a guitarist and song writer. But, yes, the request to have the crowd wave their arms from side to side was a bit gay.