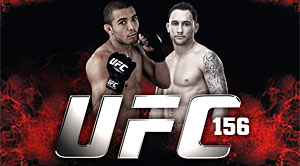 Nobody has been able to stop Jose Aldo’s featherweight title reign, but Frankie Edgar could be the toughest challenger yet. In his first featherweight fight for the UFC, Edgar has been deep in the championship rounds and has arguably the best cardio in the sport. Edgar may not be able to impose his wrestling skills on the bigger Aldo and needs to watch out for the Brazilian’s lethal striking. This should be a super fight for the ages.

Rashad Evans is no stranger to long layoffs, but he has always looked in shape. He must avoid the jiu-jitsu and ground game of the Brazilian veteran who is famous for his and his brothers’ excellent submission skills. Like Ryan Bader previously showed, a Nogueira can be beat with wrestling but this should be a standup war.

“Bigfoot” has overcome the odds before, surprising many when he demolished the legendary Fedor Emilianenko and current UFC heavyweight Travis Browne. His plate may have too much on it with Alistair Overeem though, who is coming off a suspension for banned substances and will likely prove that he is next in line for a heavyweight title bout.

In a classic matchup of styles, it will be Jon Fitch’s collegiate wrestling against the black-belt jiu-jitsu phenom Demian Maia. It will be ironic if this fight stays standing, but Fitch’s power should prove the difference here, either on the feet or the ground.

This flyweight scrap is sure to ignite fireworks as both Joseph Benavidez and McCall gave current champion Demetrious Johnson problems when they both had their title opportunities. Benavidez can pack in a lot behind his punches and may be too much for McCall to handle.