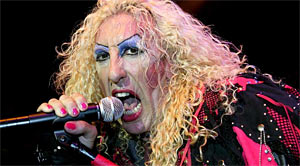 A lot of these roast-type things end up being a total flop (Gene Simmons’ left a bit to be desired), but the Dee Snider roast is truly something not to be missed. On Thursday, January 24, 2013, Twisted Sisters’ infamous frontman, Dee Snider, got roasted by some of the biggest names in the industry. And now, Hanger 19 will be broadcasting the roast and red carpet interviews this weekend.

Whether you know it or not, Twisted Sister is probably one of the most influential bands on modern metal. Yes, they had some cheesy hits that put them in the spotlight, but they also had some truly amazing metal tunes as well, “Burn in Hell” – then again, they had some horrible covers, “Leader of the Pack.” Similar to Thom Hazaert, co-host/correspondent, Stay Hungry was my first metal album, and it’s still among my favorites. When I was a kid, I’d heard that “SMF” stood for “Satan Mother Fucker,” and in the fear of going to hell, I destroyed my cassette of the album. Then I got 1984 by Van Halen.

So enough about that.

While you can see the Dee Snider roast on YouTube (below), you’d be missing out on some exclusive Hanger 19 red carpet interviews. This weekend, February 2 and 3, Hanger 19 will dedicate a 3-hour program to the Revolver/Guitar World Rock and Roll Roast of Dee Snider. The program will include tracks, highlights, and interviews from not only Dee and Twisted Sister, but roasters and guests including Anthrax, Lita Ford, Zakk Wylde, Queensryche, Guns N’ Roses and more.

“It was an honor to be a part of this roast, and to pay tribute to someone as influential and important as Dee was, not just to me, but an entire generation of Metal fans. Not only was Stay Hungry the first album I ever owned, it honestly was instrumental in my evolution into the degenerate long-haired Rock N’ Roll ne’er-do-well I was to become.”

“When Revolver first told me about the roast, I knew not only did I want to be involved, but in a big way. And, as I was already attending as a guest (Hazaert sponsored a table with his THC MUSIC label, as well as a full page ad in the Roast Program), I pitched the idea to (Hangar 19 producer/host) Cutter to grab some interviews for Hangar 19, and it evolved into an entire show not only commemorating the roast, but paying proper tribute to Dee, a bona fide Metal legend. It was an honor and a privilege, and I can’t be thankful enough to the good folks at Revolver, Guitar World, Monster Energy, AXS TV, and everyone else involved this show.”