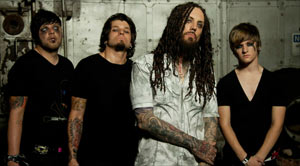 “Head” Welch left KoRn back in 2005 to focus on faith, fatherhood, and a solo career. Judging from the new Love and Death track, “The Abandoning,” he has followed the dub-step influence seen in his former band. Instead, he’s still making the kind of alt metal that made him famous. Not that there’s anything wrong with the “if it ain’t broke, don’t fix it” mentality, but there’s nothing new being offered here.

“The Abandoning” can be found on Love and Death’s just released record, Between Here and Lost, available for purchase on iTunes now. Love and Death will be hitting the road with TFX in late February to promote the new record. Check Love and Death’s Facebook page for a full list of tour dates.