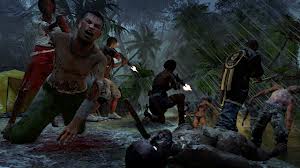 Are you curious about Techland’s upcoming sequel or spin-off to last year’s epic zombie-survival RPG? If so, then we got a sweet Riptide update for you today that demonstrates new gameplay mechanics in the game. Deep Silver wants to keep fans, like myself, excited and have us waiting on our toes before the launch in April, and they just made matters worse in terms of anticipation by releasing a nine-minute video of pure gameplay footage from Dead Island Riptide. The video also includes the publisher’s notes that explain the mechanics.

Riptide picks up from where Dead Island left off, and you will be instantly comfortable with the basic controls in the game because they’re identical to those of the first game, including the quick menu to switch weapons, as described in the video. You will notice that some of the zombies are also very familiar looking, especially that annoying fat zombie that spews acid at you. As for the score, well that pretty much stayed the same too.

Up until now, nothing new has been described, however, the gameplay does start to pick up in the video once the player finds mini-guns on a helicopter. Now this is where things start to get interesting. The goal is to bring them back to the hub and use them as turrets for defense against a wave of zombies. But before getting to the hub, the player must use a self-driving boat to carry the mini-guns to the destination point, which is another new feature in Riptide. Since the storm has wiped out some of the roads, boats are the only viable way to travel to some parts of the island. It’s a neat little feature that allows for interesting defense missions, and I’m really glad that cars aren’t the only drivable vehicles in the game anymore.

Lastly, the turrets and some landmines are placed at the hub, and you can be sure a zombie massacre is underway. Check out the video for yourself and make sure to drop a comment below.