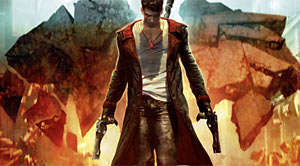 When it was announced that UK developer Ninja Theory (Enslaved, Heavenly Sword) would be producing the reboot of Capcom’s stylish hack-and-slash, Devil May Cry (now known as DMC), plenty of gamers freaked over the new direction. All information pointed to a younger Dante sans-white hair, and it was generally assumed the new title would be too great a departure for longtime fans to stomach. Well y’all can worry no more, because DMC is exactly the breath of fresh air this series has needed for ages.

By setting the game in a timeline well before the events of previous installments, Ninja Theory introduces a younger Dante who is somehow more brash and hot-headed than the son of Sparda we already know. Demon slaying by day and group-sexing by night, our new hero discovers a higher purpose and his own origins after reuniting with his twin brother, Vergil. Leader of an underground anti-demon organization known as The Order (think hacker group Anonymous), Vergil jogs Dante’s amnesia-clouded brain and lets him in on the truth: there are demons living among us, and by clouding our minds via spiked energy drinks/taking over all the world’s media/ruling the economy by orchestrating mass debt, they are taking over the globe. King of all demons, Mundus, runs the show, and the brothers’ father, Sparda—once second in command in the demon hierarchy—has been imprisoned for eternity after falling in love with an angel and defying his boss to have children—Vergil and Dante. The brothers are nephilim: half-demon and half-angel, and they are the only ones who can disrupt Mundus’ stranglehold on the world. Hot damn!

Ninja Theory has long been known for killer writing, but it’s clear that stylish combat is the star of the show. This has always been the focal point in the series, and the UK developer has created a deep and satisfying combo system that takes hours to unlock and even more to master. Dante still wields the sword Rebellion and twin pistols Ebony & Ivory from previous games, but he also inherits new demonic and angelic weapons that are, in a word, badass! Melee is flawless as merely holding down one of the triggers allows our hero to utilize his new toys. Stringing attacks with each of the weapons becomes a downright pleasure, especially as more and more abilities, combos and attacks are unlocked with experience points earned by slaying the demonic hordes.

Traversal abilities become more and more exciting as each new weapon provides new means of exploration. The Osiris, for example, allows Dante to fling himself about via floating waypoint in a way that’s extremely similar to Nero’s demon arm from Devil May Cry 4. The Arbiter (a totally bitchin’ and heavy-hitting axe) allows Dante to manipulate the environment and open up new paths for exploration. This becomes particularly interesting during levels which contain hidden rooms or multiple paths.

Boss battles in Devil May Cry have been incredible since that one spider dude crawled up over the parapet in the first game, but everything is bigger and better here. There’s an almost Zelda tone to the puzzle-like nature of these battles, and some of the bosses are downright scary. One of the baddies in particular spews some pretty amazing and outrageously obscene dialogue at Dante…it seems like Ninja Theory had a total blast writing this thing. The strong and intelligent writing perfectly lends itself to the stellar voice acting as we learn that even though Dante is a hot-blooded badass, he still has a lot of heart.

Find out what we think is bad in DmC: Devil May Cry and our verdict on the jump…