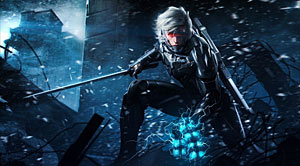 Metal Gear Rising: Revengeance is nearly here guys, but we still need to wait out a few more weeks before we can finally hack-and-slash with cyborg ninja, Raiden.

Since this installment is a spin-off of the Metal Gear series, and you must already know that the usual stealth mode we’re are all so familiar with won’t be handy in Revengeance because the focus of the story is only on Raiden and is set four years before MGS 4: Guns of the Patriots. Speaking of Raiden, MG creator Hideo Kojima recently spoke about Revengeance in an interview with IGN and said that he would have preferred that it featured Grey Fox or Frank Jaegar from the series rather than Raiden, who was chosen by the staff at Kojima Productions.

“It was my staff in Kojima Productions that insisted on Raiden,” said Kojima, “and I respected their idea. I wanted to really focus on production than development, and they wanted to come up with a really cool hack-and-slash title with some Katana action and Raiden in it, and I thought ‘okay, that’s fine, I respect that’.”

“But in my personal opinion, I wanted to go for Frank Jaegar or Gray Fox. But if we had gone with that, I would have had to write the script and then be really committed to creating the game.”

Although, I know many fans of the MG series probably agree with Kojima, including myself, because he isn’t the coolest character in my opinion, but I honestly won’t judge until the game is in my hands on February 19.

In the meantime, enjoy this new gameplay trailer for Revengeance released by Konami that shows off the skills of the katana-wielding master and features some boss battles such as Mistral, Monsoon, Sundowner and the beginning of the battle against Samuel.