UFC President Dana White Is Such A Prankster [VIDEO] 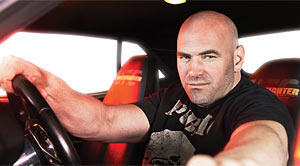 Occasionally, we feature Dana White’s vlogs because they give us a good look at what goes on behind-the-scenes during a UFC MMA event. Well, we’ve done it again, and this time it’s for UFC 155.

If you recall, it was the last big Pay-per-View event of 2012, which featured a rematch between UFC Heavyweight Champion Junior dos Santos and Cain Velasquez, that White gave of some good insider stuff. Surprisingly that match was in favor for the former champion, Velasquez, dominating Santos in each round that night and earned him the strap. The video blog for UFC 155 captured the moment Velasquez was getting ready to step inside the famous Octagon, including Dos Santos, and a brief look at the aftermath between Joe Lauzon and Jim Miller.

Aside from all the serious stuff in the video, Dana White also shows off his funny side and pranks the CEO of Zuffa LLC, Lorenzo Fertitta, with some grapes and smelly cheese.

Check it out and don’t forget to drop us a comment or two in the feedback section below.